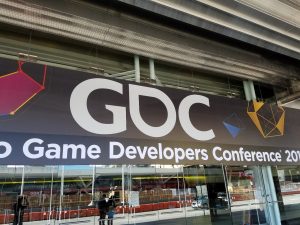 I attended the Game Developers Conference in San Francisco last month. A meeting of professionals from across the game industry, the conference features exhibits of the newest developments in gaming technology as well as talks given by veterans and newcomers alike that range from topics as diverse as virtual reality, ethical open sourcing, to board game sticker design. For anyone looking to get the pulse of the game industry, this is the place.

The conference is markedly different from similar consumer-oriented offerings such as E3, but industry members are fans as well and so the popular games of the year make frequent appearances. Members of the Overwatch design team presented numerous panels about the technical, artistic, and narrative components of the game, all to packed audiences. Final Fantasy XV also drew significant attention, and there was a single panel about a smaller game that had released during the conference – something called Breath of the Wild, which wasn’t expected to make waves but might just have made some dedicated console fans switch to a new system.

The centerpiece of GDC last year was VR, and that trend continued this year. The way in which the technology was presented, however, changed notably. Indeed, virtual reality as a consumer technology in the gaming space seems to have matured over the incarnation exhibited last year. Take a snapshot of the show floor then and you would see all manner of large and unwieldy contraptions intended to maximize immersion into virtual worlds   – the Virtuix Omni is an infamous example. Make an audio recording of that same show floor and you would hear all manner of complaints about these devices from developers and industry insiders. Concerns ranged from the feasibility of designing software for the various devices on display to the impracticality of technologies presented as consumer-friendly devices. In 2016, to use the Gartner Hype Cycle, VR was very clearly transitioning into the “Trough of Disillusionment”.

In contrast, this year saw more refined virtual reality products, with headsets such as the Oculus Rift and Google Daydream taking center stage. Also given prime floor space were a variety of software solutions for motion capture, facial recognition, and other elements intended to enhance VR applications. While these products and devices still generated significant interest, there seemed to be a general agreement among conference attendees that virtual reality as a platform for software development was now a much more sensible and stable proposition. Of particular interest to me were presentations made by key industry players such as Valve, EPIC, and Unity about standardization of VR technologies proposed by a consortium of computing companies and research institutions called Khronos Group. Khronos presented OpenXR, which would serve as a cross-platform link allowing plug-and-play functionality for virtual reality devices and development environments. If virtual reality is to become truly viable as a consumer technology, the proposed standard would seem to be the key; infrastructure matters, and witnessing VR’s evolution at the Game Developers Conference has only impressed this upon me further.

I plan to return to the Conference next year as well, and the Informatics Game Research Group – inGame – plans on bringing a contingent of interested Informatics graduate students next year to inform and promote Indiana University research into the vibrant world of games.

Grounded in the Science and Technology Studies (STS) tradition, the Computing, Culture and Society (CCS) track focuses on the relationship between technological innovation and larger social, political, legal, and economic developments.

From social media and artificial intelligence, gaming, domestic and workplace applications, little data and Big Data, to mobile technologies and giant server farms, computing technologies are a constant presence in our lives.